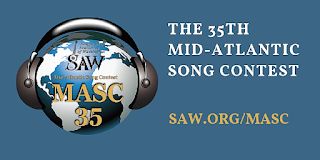 That's just the latest in a string of awards for that song: it also won awards in the U.K. Songwriting Contest (in two categories), the Just Plain Folks Lyrics Contest and the American Songwriter Lyric Contest.

And you may recall that "Land Of Love" was a finalist in the 2001 Mid-Atlantic Song Contest.  We're finally recording a finished version of that song for our next CD.  (And "Television Sky" was an MASC category winner.)

And, finally, Mike was selected as a finalist in the 2019 South Florida Folk Festival Singer-Songwriter Contest, and will be performing at the festival in Fort Lauderdale in January.