Hooray! - the video for our new song, "Another Life", is finished at last and posted on You Tube.  It's got twice as many images as our "Government" video, so it ended up taking lots more time than I had expected.  Of course, this is true of all my projects.

In the next life, I hope to transcend this personality flaw.

Although if it's my karma to return as a worm or an insect, I won't have to worry about that.  I'll be worried about birds.

Anyway, it was really fun finding the images and choosing the transitional effects.  When I saw the picture of the baby wearing virtual reality goggles, I knew it had to be the final slide, and that I would lead into it with a series of psychedelically accelerating visions a la "A Day in the Life". 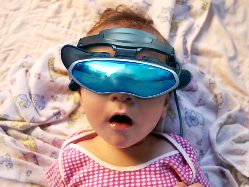 Somewhat less fun was working with freeware Slide Show Movie Maker, which doesn't have the ability to easily sync images with audio.  That means I had to guess how many seconds each image and cross-fade should last, then compile and view the video, change values and repeat.  And repeat.  And repeat.

Not surprisingly, by now I have every image and fade memorized.  Waking or sleeping.  This is not a particularly good thing.

I'm hoping I can flush out and de-program myself by watching a Three Stooges film festival, or a marathon of House or Family Guy episodes.

And I have no idea how to describe or categorize this song/video.  The only thing I'm sure of is that it's a sort-of tribute to Mrs. Vlock at PS 114, whom tried to teach me the distinction between "me and you" and "you and me".

So watch the video a few times (but be careful - not too many times!), share it with your friends, and then do something to get involved socially or politically.

Or don't.  It's your karma.  Wave your antennae and watch out for that robin.

It's springtime, and the world is still here.  Time to pick up the guitar and start rehearsing - we'll be doing some performing soon.  Stay tuned.

- Mike
Posted by New Middle Class at 3:42 PM No comments: