What Are The Odds? (plus Altercation On Arcturus)

Just after I had written my last blog entry where I mentioned that great (and rarely played) song "IGY" by Donald Fagen (of Steely Dan), I walked into a store, and it was the first song to come over the speakers.  I was able to resist buying the sound system only by focusing on the extraordinary coincidence.

Which reminded me - just last week, I happened to be watching Mega-Python vs. Gatoroid on TV (there was nothing by Shakespeare on PBS at the time), and I thought that the grizzled and canny game warden looked and sounded extremely familiar.  Then I figured it out: it must be a grizzled Mickey Dolenz (of The Monkees), down on his luck and forced to take a bit part in an embarrassingly corny (but fascinating!) made-for-TV movie.

But when I pushed the Info button on my remote, Dolenz wasn't in the credits - it wasn't him.

Five minutes later, it was mentioned that someone would be bringing a performing monkey to the wildlife center fund-raiser.  And shortly after that - you guessed it - the performing monkey turned out to be a performing Monkee, Mickey Dolenz, not grizzled but looking puffy and Botox'd, with a higher voice, more like I remembered from his critically acclaimed starring role in Circus Boy.   ( [SPOILER ALERT] Mickey was eaten by a mega-python just as he was about to sing "one of his most popular songs" - damn!  I bet it would have been "I'm A Believer".)

And could it be coincidence that I happened at the same time to be re-reading (for the first time since teenhood) The Non-Statistical Man by Raymond F. Jones, in which the world experiences a wave of occurrences which defy the laws of statistical prediction?

From my sketchbooks...here's a drawing that reflects today's sci-fi theme: 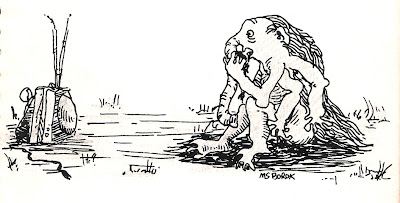 Actually, it's an illustration for this vignette which opens the sketch book:

The creature that pursued him was close behind.  He could hear trees snapping and the lush tropical foliage being trampled.  Then, just off to his right, he suddenly heard an unearthly scream of female terror.  Instinctively, he veered towards the sound, careless now of the death that closely followed, and as he burst into the clearing, an unbelievable scene was revealed to his amazed gaze.

An alien being with several arms and a long nose squatted before an unplugged portable television set.  It absently munched a handful of mud.  As he gaped at this primal scene, he felt a tap on his shoulder from behind.  He quickly turned to find himself staring down the long barrel of an atomic blaster!